Showing posts from November, 2015
Show all

CHARLIE SHEEN ADMITS TO HAVING HIV

Hey it's your girl JA Nursing here,  As your health care advocate I certainly had to weigh in on this topic  Especially with  World Aids Day Coming up December 1 2015 . Last week  The former star of sitcom Two And A Half Men appeared on NBC's Today show, ending days of intense media speculation.

"I have to put a stop to this onslaught, this barrage of attacks and of sub-truths," he said, adding he was diagnosed four years ago.  Lets not forget the many other celebrities  who came out but have since passed. Like Easy E. Freddie Mercury. Sheen has now joined the ranks of Magic  Johnson    who   confirmed  his diagnosis publicly back in 1991,  then  a 32 year old Johnson , shocked the world when he announced that he was HIV-positive,
We know now that Anyone can be infected with HIV, no matter... your age your sex your race or ethnic origin who you have sex with
.  In August Basketball legend and business mogul Magic Johnson turned  56, Giving hope that you can …
Read more 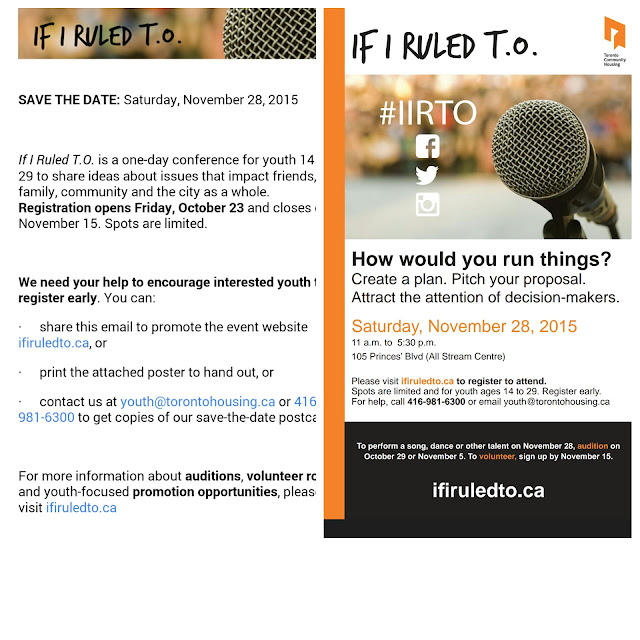 If I Ruled T.O. is a one-day conference for youth 14 – 29 to share ideas about issues that impact friends, family, community and the city as a whole. Registration opens Friday, October 23 and closes on November 22     Spots are limited. We need your help to encourage interested youth to register early. You can: ·       share this email to promote the event website ifiruledto.ca, or ·       print the attached poster to hand out, or ·       contact us at youth@torontohousing.ca or 416-981-6300 to get copies of our save-the-date postcard. For more information about auditions, volunteer roles and youth-focused promotion opportunities, please visit www.ifiruledto.ca
Read more

Bye Felicia ! A Guide to Removing Emotional Vampires out of Your life 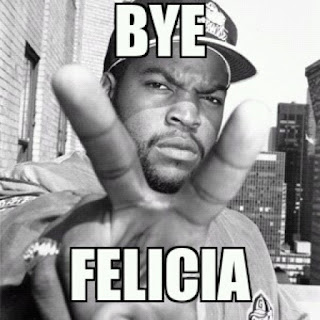 Hey It's your girl JA Nursing here, how have you all been? So  as we  get closer to the end of the year it's that  time to wipe away negative people and situations out of  our lives. So one day  I heard someone say #ByeFelicia, with keeping that in mind
Emotional vampires are lurking everywhere and wear many different disguises–from needy relatives to workplace bullies. Whether they do so intentionally or not, these people can make us feel overwhelmed, depressed, defensive, angry, and wiped out.

The phrase "Bye, Felicia" came from the American stoner buddy crime comedy film Friday (1995). According to Ice Cube, who starred in the film and co-wrote its script, "Bye, Felicia" is "the phrase 'to get anyone out of your face.'"[1]


You can’t live a positive life around negative people. Sadly, some people love  seeing the negative side of things that they leave zero room for positive things to grow.
The first step to getting rid of them is to r…
Read more

A Health Care Coach Makes You A Winner Join In !

Hi Its your Health Advocate Michelle Smith here,  With the launch of  my new program Health  Care Shield , I just wanted to welcome you to this  wonderful journey that you will be embarking on. I will  explore what most health-care providers and fitness coaches will  overlook (like self-love, environmental influences, social determinants, and  medical factual knowledge.
If you are still wondering Why  you should use a Health Coach/Advocate . Let me start off by letting you know that  we work in conjunction with  your trainer, health care provider  to help mold habits that will stay. We will  teach you how to achieve your optimal health goals for not only yourself but this is knowledge that will suite the needs of your whole family.  We give you the power through knowledge to be in charge of your health. We believe in teamwork for wellness.

The words Health and wellness are often used interchangeably, but they have slightly different meanings. Health is a "State of complete ph…
Read more

THE JUICE CUP Returns: THE 6IX vs Everybody NOV 14 &15 GET YOUR TICKETS EARLY! 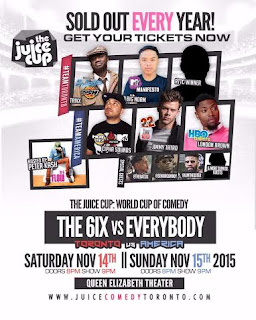 Hey its your Girl JA Nursing here, oh yes it's that time  again with another dose of laughter therapy as   The Juice Cup Returns

Rocnorth Apparel Presents
THE JUICE CUP: 6IX vs Everybody
The World Cup of Comedy • Team Toronto vs Team America
SATURDAY NOVEMBER 14TH, 2015 • 9:00PM
SUNDAY NOVEMBER 15TH, 2015 • 8:00PM
This is my favorite time of year
This year’s battle features some of Toronto’s top talent facing off against comedians from all over America. Familiar faces from online and on stage, movies and television! Sold out every single year, you don't want to miss it!
GET YOUR TICKETS NOW
https://tickets.ticketwindow.ca/eventperformances.asp?evt=1783